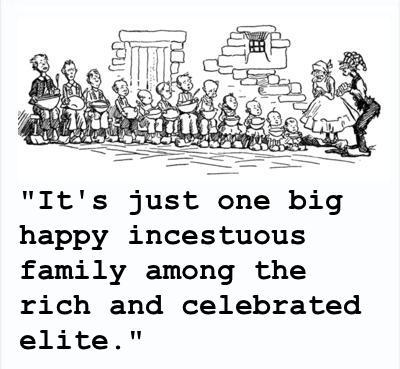 THERE ARE NO COINCIDENCES

The world loves and exalts its own.

And the world’s media is the agent of much of that exaltation.

More on the bloodlines among the rich and celebrated.  Actor Johnny Depp is the Queen’s cousin; the Prince of Wales’ wife is Madonna’s cousin. Singer Celine Deon is from the same family and is related to Justin Bieber; and, much more.

2000 ELECTION, BUSH-GORE: “Never in the history of the United States have two presidential candidates been as well endowed with royal alliances. There has always been a significant “royal factor,” in those who aspired to the White House, with Presidents George Washington, Thomas Jefferson, Theodore Roosevelt, Franklin Roosevelt and Ronald Reagan, among others, all boasting blue blood links.

Al Gore…a descendant of Edward I, he is also a cousin of former U.S. President Richard Nixon, who resigned from the White House in 1974 for his part in the Watergate scandal. However, Al Gore does have direct links to the Holy Roman Empire. He is descendant of Roman Emperors Louis II, Charles II, and Louis I and is therefore also a direct descendant of Charlemagne, the eighth-century Emperor. The problem is that Gore’s Charlemagne links also make him a cousin of George W. Bush.”
—Harold Brooks-Baker, Burke’s Peerage Publishing Director p. 7, NEXUS magazine, Vol. 8, No 1, January-February edition

By another great and unlikely string of coincidences, George W. Bush is related to 217 of the participants in the Salem witch trials.

A great many of America’s elite and celebrated are descendents of the various Salem witches, including many famous Hollywood personalities.

2. SALEM WITCHES 2015 – The descendents of witches walk the halls of Washington, Hollywood, New York and wherever power, money and influence gather in the USA.

Some descendents of the Salem witches:

George W. Bush was related to as many as “217 of the almost 1,500 trials participants including jurors, marshals and constables who accused others, or were accused, of witchcraft.”

While the descendents of Salem witchcraft are likely to be coy about the subject in public, the number of organizations honoring Salem witchcraft descendents are evidence of intense interest among certain groups of Americans.
—Witchcraft in America in the End Times: Some Observations

ALL 44 US presidents are related.

43 US presidents are directly related to King John I of Great Britain.

Now that the masses have taken note of such inter-relationships, the media has spent time and resources to convince the masses these relationships do not mean anything. Does the reader believe this?

It’s all just one big happy incestuous family among the rich and celebrated elite.

What a centuries-old string of coincidence!

“Coincidence is the word we use when we can’t see the levers and pulleys.”
—Emma Bull

Hand of God: No Such Thing as Coincidence

It is a very convenient word for explaining away two related events. One doesn’t need any evidence, any proof, ANYTHING: just declare two events which all evidence shows to be connected as a “coincidence” and the debate is supposedly over.

Which is why the word is so immensely popular among the rich, the celebrated, other members of the mystery of iniquity: in short, all who labor to pull the world over the eyes of the ignorant masses.

The Bible declares there are no coincidences.

“The lot is cast into the lap; but the whole disposing thereof is of the LORD.”
–Proverbs 16:33

The reader is taught the world is a place of pure chance: there are no conspiracies among evil men; men do not gather together to make plans for increasing their wealth or power; leaders do not conspire together for their greatest benefit; rulers make no plans together for the future.

Yet, the reader knows this is not true.

The evidence confronts him in his daily life; in the recorded histories of men; even among the controlled, manipulated reality which is television.

“There are no coincidences. Only the illusion of coincidence.”
—V for Vendetta

The reader is indoctrinated that there are no conspiracies. Almost daily he is taught that those who believe ANYTHING other than what the Corporate Media or government provides are “conspiracy theorists.” He is taught that such people are crazy and conspiracies do not exist.

IN our modern world, the reader is being taught that those who believe contrary to the accepted media/government versions are “dangerous extremists.”

But the Bible teaches that there is a great conspiracy at work during the end times.

“The kings of the earth set themselves, and the rulers take counsel together, against the LORD, and against his anointed, saying, Let us break their bands asunder, and cast away their cords from us.”
–Psalm 2:2-3

The rulers of the earth conspire together to throw off any restraints or laws imposed by God and His Anointed, Jesus Christ.

The reader can see this at work. IF the reader is older than 40, he has seen it at work during his lifetime. Most likely, the reader may even have remarked on it.

Which is why he is constantly taught by the media/government it is not happening.

It is only a coincidence.