TURKEY: US Orders Diplomatic, Military Families out of South Turkey

ISRAEL: The Strange Case of a Nazi Who Became an Israeli Hitman – Funny how that works out, huh?

There’s actually quite a LOT of these “strange” stories about how the synagogue of Satan and the Nazis cooperated.

ISRAEL-IRAN: ISRAEL-IRAN DRAMA: A Long-Running Part of an Ancient Plan

Though this does not affect real Christians–who know exactly what to expect.  BUT the counterfeit variety, who are bereft of both the Holy Spirit and God’s protection, it’s effective.

The public “war on Christians” is a fake one, perpetrated by the same folks who will soon undertake the REAL one.

“And they overcame him by the blood of the Lamb, and by the word of their testimony; and they loved not their lives unto the death.”
–Revelation 12:11

Media pieces such as this also promote the lie that Christianity is dependent upon man’s protection.

“upon this rock I will build my church; and the gates of hell shall not prevail against it.”
–Matthew 16:18

When Satan’s Mouthpiece (the Corporate Media) is no longer remembered, Christ’s Church will still endure forever.

Nuclear Holocaust: The End of the World According to Satan

CLIMATE CHANGE: The End of the World According to Satan

295 days until Inauguration Day 2017 – This countdown is more of a courtesy than the marking of any great change in the way the elite powers which control the USA will govern.

The reader should not fall for the lie that changing the figureheads at the top will result in any great changes in his daily life.

Oh yes, there will a great number of pieces in the Corporate Media (Satan’s Mouthpiece) declaring the exact opposite.  But all the reader has to do is think back: has any president’s coming changed his life for the better?

“More than 47,000 people have signed a petition to allow guns at the Republican National Convention. And every single one of them is a Democrat.”
–Conan

It will start with Muslims.

It will not end there.

Those who do are hopelessly deceived.

Scott Walker Endorses Cruz for ‘3 Simple Reasons’ – And somehow, some way: this is supposed to be important.

A candidate who dropped out MONTHS ago with a reported 1 percent support (and has a hard time finding support in his home state), endorses another candidate and this is supposed to influence people?!?

Who was sitting at home saying “I want to vote, but I can’t.  I don’t know how Scott Walker feels yet.”

The only place political endorsements matter is in the manufactured, artificial reality constructed by the Corporate Media.

NOTE: When rumors of Hollywood celebrity affairs hit print, it’s usually a pre-emptive publicity strike against credible evidence the celebrity is a homosexual.

Likewise, when a rumor about a politician having extramarital affairs surfaces during a campaign, it’s usually a sign that there’s some credible evidence that the politician is gay. (See John Edwards, 2008 and Bill Clinton, 1992.)

We’re not saying any such politicians in that situation is homosexual: we don’t know.  We’re just relaying the info of the past practices of the Corporate Media, Rumor-and-Gossip Division.

Trump signals he’s ready to fight for every delegate

Donald Trump campaign manager Corey Lewandowski charged with battery for grabbing Breitbart reporter Michelle Fields – Anyone not recognizing this has been a staged affair from the beginning is not paying attention.

Trump is every bit as popular today as he’s EVER been–outside the contrived world of TV and smartphones.

WORKERS OF INIQUITY: This is Their Story

Feminism is Witchcraft by Another Name

Pictured: The Tennessee PASTOR who was shot by police when he was able to pull a gun in the Capitol building – despite being banned months ago for shouting he was a ‘prophet of God’ – It’s coming.

Border Patrol Union: Cartels Cut Hole in Border Fence – The media continues to portray the 100 percent, completely manufactured problem of the US southern border as some sort of unsolvable puzzle of mystery.

North Carolina Attorney General Roy Cooper won’t defend transgender law in court – OF COURSE he won’t.  Just who do the people of North Carolina think they are?

They act like they’re running the place or something.

RETURN OF THE GUILLOTINE? 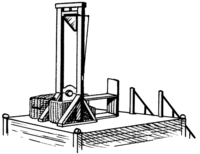 Mississippi House proposes firing squad instead of lethal injection because it is ‘more humane, effective and cheaper’ – The “search” for a more humane way to execute will lead back to the guillotine or the chopping block.

“And I saw thrones, and they sat upon them, and judgment was given unto them: and I saw the souls of them that were beheaded for the witness of Jesus, and for the word of God, and which had not worshipped the beast, neither his image, neither had received his mark upon their foreheads, or in their hands; and they lived and reigned with Christ a thousand years.”
–Revelation 20:4

Persecution of the Saints: The Fear and the Pit and the Snare

Evangelicals, Millennials and Snowpocalypse: March for Life Leader on the Pro-Life Movement – They march around, they wear ribbons, they sell ribbons, they talk a lot. They distract.

All of the time.

Consider the shambles of the American “Pro-Life” Movement: an abject and total failure over the course of 40 years representing a cause which the majority of Americans favor, yet the “movement” has not ONE significant victory.

The movement couldn’t have performed any worse had the enemies of God been running it.

Of course, some of these traits are NEVER hard to find, particularly in the times in which we live. For example: “the ability to act without permission” might also be called “disobedience.”

Which is everywhere in abundance these days.

Satan Hidden in Plain Sight: The Antichrist, Apostate Churches of the Dragon

Birthdays: A Day of Celebration for Those Born Once

BIRTHDAYS: A Heathen Practice, Not a Christian One

Obama: Addiction is a treatable disease – Actually, addiction fits NO model of disease.

But the Corporate Media/government has waged a decades-long campaign to convince Americans that sin is not their fault, not a behavior and is beyond their control: a disease.

The Stages of Alzheimer’s Disease – Wonder why the Bible records no cases of dementia among the righteous?

“The glory of young men is their strength: and the beauty of old men is the gray head.”
–Proverbs 20:29

“The hoary head is a crown of glory, if it be found in the way of righteousness.”
–Proverbs 16:31

Climate Change or Word of God: Make Your Choice

Global Warming: What does the Bible Say?

Ebola in America: What does the Bible Say?

“How can the reader know when the Corporate Media is lying to him (never mind the fact that the media is Satan’s Mouthpiece and Satan is the father of lies)? One easy way to tell is the use of “Why” and “How” in the headlines of an article. When the reader sees “Why?” or “How?” in the headline–occasionally “What” is used–that which follows will be a fairy tale, a narrative, a bedtime story spun by the media for the benefit of the media’s master. “Why” usually denotes an on-going narrative; “How” signifies a story line which explains past events. Not all narratives begin with “How” or “Why.” However, the most in-your-face, over-the-top ones usually do. ALL political “news” is narrative.

Corporate Media: Satan’s Mouthpiece is the Author of Confusion

“Things are never quite what they seem. Events are seldom close to how the media and history portray them.”

WHY Cars Might Have To Be Replaced More Often In The Future – The idea being “Gee, it’s going to be so expensive to own a car.  Why not just get a nice  bicycle or a horse?”

WHY My Family Won’t Boycott Disney Over Disney’s Bullying of Georgia – Of course not.  That would be such a normal, plebeian reaction.

What’s annoying is the great number of faux Christians (there are no other type in the Corporate Media) who pretend they are guided by something other than self interest.

WHY Science would benefit from being self-refereeing – Why not? It has worked out so well for Hollywood and lawyers.

The Death of Moral Relativism – Moral relativism doesn’t matter where the only morals are corruption-based.

Smarter, Stronger, even Happier: Brain-zapping gadgets promise to make you a better you — The explanations for demonic power will be many, varied and creative.

Ex-Super PAC Official Claims Trump Didn’t Want to Be President – As Donald Trump continues down the road of self-implosion, articles such as this will attempt to explain his incredible string of unforced errors, blunders and outright slaps to the face of those very, very few people duped into supporting him.

IN CASE YOU MISSED IT: End Times Prophecy Headlines: March 29, 2016