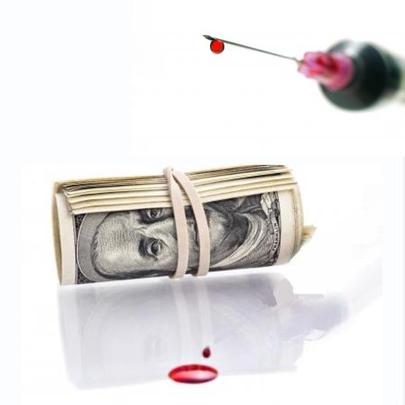 Like all of Satan’s lies, “right to die” begins with great, flowing words and grandiose speeches about “dignity.”

It ends where it really began: murder.

Specifically, the murder of those unable to protest by those whose highest concern is convenience.
—Right to Die is the Right to Murder

“Now the brother shall betray the brother to death, and the father the son; and children shall rise up against their parents, and shall cause them to be put to death.“
–Mark 13:12

“And because iniquity [sin] shall abound, the love of many shall wax cold.”
–Matthew 24:12

This murder of family members is another in a multi-pronged attack on the family unit and family bonds. It is an “Us vs Them” where both sides are in the same family.

And: it is murder.

Oh, to be sure, the murder is masked by plenty of crocodile tears and expressions of sorrow, piety, how the dead be missed and regret over them no longer being among the living.

But it’s still murder: the taking of a human life.

Many Americans believe it’s a murder only when there’s no attempt to cover it up or to give it another name. But in America (as elsewhere), murders aren’t just those actions many think of as ‘murder.’

Murder in the end times has many different names.

“Death with dignity,” assisted suicide, and euthanasia are only attempts to disguise what’s really going on.

Ironically, the death cults try to convince the ignorant how “caring” they are by ginning up concern over the death of pets, the rain forest, whales, dolphins–even insects.

Like so much else in life, “death with dignity” is a tool to be used to make this present life more comfortable for those who pull the plug–and are still around to enjoy it.

ITEM: New York to introduce Death with Dignity – That the dead have “dignity” is a clever ruse used to persuade others that legalized murder is the way to go.

Once one goes into one of the many “death with dignity” centers strung across the USA, one never comes out alive.

ITEM: Right-to-die advocates create cheaper lethal drug mix after company doubles price – It’s all about a painless death–for someone else.

And enough of it goes on every day in the death-with-dignity death houses which litter the landscape of America.

But they want to make it all nice and legal-like.

The most famous “death with dignity” was the 1995 dignified starvation and death by dehydration of Teri Schiavo.

This month marks the 10th anniversary of the death of Terri Schiavo. Attorney Gibbs represented her family in the battle of life that played out ten years ago when water and food were removed from Ms. Schiavo, causing her to die a hideous death after thirteen days of suffering.

For those who can’t recall Terri Schiavo:

The Terri Schiavo case was a legal struggle involving prolonged life support in the United States that lasted from 1990 to 2005. The issue was whether to carry out the decision of the husband and legal guardian of Theresa Marie “Terri” Schiavo to remove Terri’s feeding tube that provided life support.

Schiavo was starved and without water for 13 days before she died.

Hers was the “death with dignity” lie we hear so much about from the “Right to Die” movement.

2 things about right to die.

1- It’s always the right for someone else to die.
2- Assisted suicide soon comes to mean assisted murder.

It was always Terri Schiavo’s husband working tirelessly through the courts fighting for her to be starved to death.
—End Times Prophecy Headlines: February 21-22, 2015

For many decades there have been notables such as H.G. Wells, George Bernard Shaw and Bertrand Russell advocating the killing of those “unworthy of life.” The general public has seen their remarks, though, as simply the attitude of isolated elitists, and not part of a plan for euthanasia. To the contrary, there has been such a plan!
[…]
Welcome to the Brave New World of euthanasia. It probably is already in a hospice or hospital near you. Do you think this is an alarmist overstatement? In early March 2005, Dr. William Mammesfhar (a Nobel-prize nominee and internationally recognized expert on brain injuries) visited Terri Schiavo and said he believed she could eventually eat and drink on her own. He also indicated that with therapy, she could talk and regain use of her arm and hand. If our judicial system can order the killing of such an innocent person, what makes you think they won’t order your death?
—The Alethea Report, April 7, 2005

The death cults are all about “dying with dignity.” And if inconvenient people won’t die, then who can argue against giving them a shove into the grave?

The Invisible Holocaust – Death centers have sprung up across America (and the rest of the world). They claim to offer “death with dignity.”

What’s certain is: they offer death.

Often, this death is a fairly quick death for the inconvenient who cannot protest. Occasionally it is not.

Most of the time, the victim is knocked unconscious and kept that way until the maximum Medicare benefits can be extracted by the institution (usually 5 days). Occasionally, the victim is well aware of what is going on and is none too happy with it.

And it all take place in The United States of America: The World’s Most Christian Country Ever™!

It is the end times. There are already LOTS of different names for murder.

No doubt, there will be others as well.

Even if the reader is in fairly good health, he never knows when his appointed time is up.

“And as it is appointed unto men once to die, but after this the judgment:”
–Hebrews 9:27

2 thoughts on “Death with Dignity: The Murder of the Inconvenient”