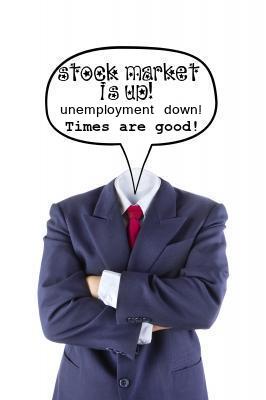 “They treat us like mushrooms. They keep us in the dark and feed us manure.”
–Old Soviet joke

The government providing false facts and figures about the economy in order to make it appear that “all is well” is an old practice.

The media serving as the mouthpiece for government is also an old practice.

These were tricks popular with the rulers of the old Soviet Union.

The Soviet government proclaimed record wheat harvests and tremendous economic gains while Russians (and others in that system) stood in line for hours for bread and toilet paper. The Soviet media was full of glorious and grand numbers and statistics which “proved” that the Soviet economy was humming along like a well-oiled machine. The Soviet system was great!

Like today’s America: if what a person experiences is different from what the government/media claims  is reality?

It is that person’s fault: You are not working hard enough! Work harder!

There is still a lot of stored wealth in America. This was also true during the early 1920’s in Germany. However, when dealing with paper money, such wealth is an illusion.

So it has been for the past ten years or so.

Biggest Payroll Gain In Almost Three Years Boosts U.S. Wages – The Corporate Media knows their happy-happy talk about the US economy isn’t believed.  But they also have a goal of stoking anger–and this headline makes the majority of Americans who have to deal with a broken economy angry.

The Dow Jones is at a record high – So, here’s a question for the reader: Does it feel like the USA is in a “boom?”  IF the US economy is so vibrant, where are the jobs?  Actually, where are the US jobs in the USA?  There’s plenty of US jobs in China, in India, wherever: they’ve been moved overseas.

Middle class Americans–all the while telling those who are of less means to “Get a job!”–struggle to keep up; poor Americans sink deeper in hopeless poverty; the youth see their chances of living a lifestyle they have been taught is their birthright grow dimmer and less likely–and it’s all their fault!

American urban areas are hollowed-out shells of what they once were,

Americans are NOW told that good jobs, once plentiful, have moved elsewhere because Americans no longer have a work ethic, the youth are lazy, foreign labor is cheap: the villains are many.

Jobs are another “proof” one is doing what one is supposed to do.

Don’t have a job?

What’s wrong with you? You must be lazy!

MEANWHILE, the Corporate Media is crammed with happy-happy talk of record high stock prices, record low unemployment figures and stories concerning the lives of the rich and celebrated.

Yes, this wicked world–stuffed with stuff and the things of this world–is winding down. The wicked will not prosper and this world is providing evidence of that.

There is coming a man who will “fix” much of what appears broken–at least for forty-two month, it will appear to be fixed.

Americans will flock to that man and his “answers.” Like always, citizens who have the right attitudes and behaviors will be rewarded with material wealth and “good times.”

And all it will cost them is their eternal souls.

MORE: MAN OF SIN: The Splendiferous Saga of the Man of Sin

HAS the reader placed his faith for the future in what he reads in the papers?

HAS the reader placed his faith for the future in economic systems, financial reports and the other schemes of man?