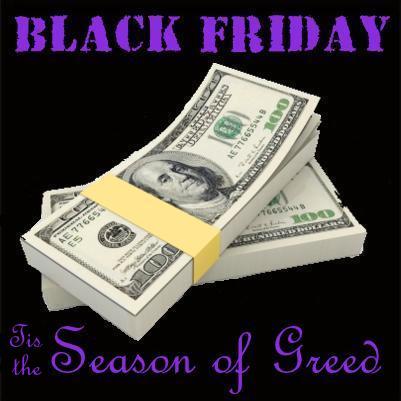 “Black Friday” is the best little holiday dedicated to covetousness that the media and business could invent.

They continue to relentlessly flog it–as they have done for the past 20 years–but most resist its siren call of cheap merchandise and cheaper promotion which attempts to prey upon the cheapest emotions.

Of course, Black Friday kicks off the annual “Season of Greed.”

Is the reader excited?

Campers already staking out Black Friday bargains – In 2013 America, people trade their time–a finite resource –for a few trinkets or 30% off the latest bauble which will be forgotten by this time next year.

The Season of Greed is almost upon us.

It’s the most wonderful time of the year!

It’s a celebration of covetousness, greed and the lust of the eyes in the “World’s Most Christian Nation Ever™:”
—End Times Prophecy Headlines: November 22, 2013

And yet, though Black Friday (the day after Thanksgiving) 2018 has much in common with its predecessors, one HUGE difference has been noticed by more than one observer.

This year’s Black Friday is missing many of the shoppers.

Instead of traffic jams, parking lots at big box retailers have empty spaces.

Instead of wall-to-wall shoppers, the aisles of stores looked emptier than before.

Instead of the masses lined up for the latest trinkets, it was the same old, tired grunts–and very few of anyone else.

Has Black Friday lost its allure?

Have the masses tired of greed?

Hard to believe any of that is true.  So expect Black Friday 2019 to feature MORE ads, more promises, bigger discounts and a return to the good, old coveting which made America what it is today.

DID the reader rise while it was still dark, stand in line or otherwise participate in any of the traditional Black Friday rituals?