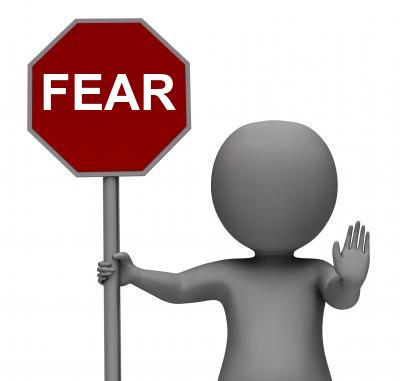 “And I say unto you my friends, Be not afraid of them that kill the body, and after that have no more that they can do. But I will forewarn you whom ye shall fear: Fear him, which after he hath killed hath power to cast into hell; yea, I say unto you, Fear him.”
–Luke 12:4-5

Man’s PREFERRED relationship with God–according to God’s Word–might be boiled down to two words.

A handy guide for living man’s life upon this earth might be summed up in four words:

One might think that such a simple formula would be passed along in those buildings known as the churches, but it is quite the opposite.

The modern teachings of those churches is that “fear” does NOT mean “fear”: according to the churches, “fear” means “awe” or “struck by the grandeur of God.”

HOWEVER, anyone who studies the Word of God knows that “fear of God” does indeed mean “FEAR of God.”

The best proof of this comes from the words of Jesus Christ Himself in Luke 12:4-5.

“And I say unto you my friends, Be not afraid of them that kill the body, and after that have no more that they can do. But I will forewarn you whom ye shall fear: Fear him, which after he hath killed hath power to cast into hell; yea, I say unto you, Fear him.”
–Luke 12:4-5

Jesus used the word “afraid” when speaking of God. This is a word used when “fear” means “fear.”

MORE: Fear of the LORD: Fear is Fear

When a man fears God, there is little else which will frighten him.

“The fear of man bringeth a snare: but whoso putteth his trust in the LORD shall be safe.”
–Proverbs 29:25

“And he said, Go and spy where he is, that I may send and fetch him. And it was told him, saying, Behold, he is in Dothan. Therefore sent he thither horses, and chariots, and a great host: and they came by night, and compassed the city about. And when the servant of the man of God was risen early, and gone forth, behold, an host compassed the city both with horses and chariots. And his servant said unto him, Alas, my master! how shall we do? And he answered, Fear not: for they that be with us are more than they that be with them.

“And Elisha prayed, and said, LORD, I pray thee, open his eyes, that he may see. And the LORD opened the eyes of the young man; and he saw: and, behold, the mountain was full of horses and chariots of fire round about Elisha.”
–2KINGS 6:7-9,11-18

This may all sound a bit odd to modern ears which have been indoctrinated with “God is love“–and little else.

OF COURSE, God IS love–but a loving God is only one aspect of God’s complex nature. “Holy” and “righteous” are ALSO aspects of that same God. As such, a holy and righteous God will perfectly judge those who believe that God is ONLY love.

In the meantime, some good end times advice would be: “Fear God, not man.”

The fear of man is a snare which is used to pry men away from a fear of the LORD.

“Hearken unto me, ye that know righteousness, the people in whose heart is my law; fear ye not the reproach of men, neither be ye afraid of their revilings. For the moth shall eat them up like a garment, and the worm shall eat them like wool: but my righteousness shall be for ever, and my salvation from generation to generation.”
–Isaiah 51:7-8

DOES the reader fear man or one of the many means man uses to control the world?