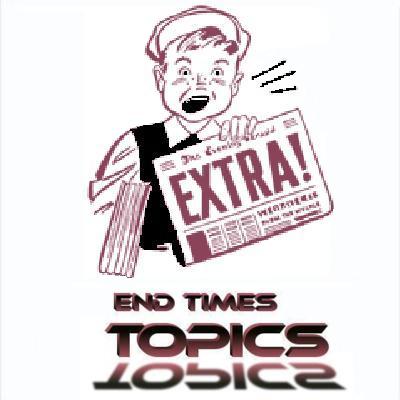 A collection of Corporate Media headlines linked to stories gathered throughout the month of July 2021 on various topics concerning the end times.

The ‘Witch of Darwin’

Witches’ Ball To Be Held At Mesquite Fine Arts Gallery

Was Stonehenge built with the aid of an ancient machine?

We Spoke To A Witch Who Debunked Everything You Think You Know About Witches!

Water ‘Witches’ Pit Science Against Folklore in Search of Groundwater

The Tarot Deck With 13,000 Amazon Reviews & A Near-Perfect Rating

Between Two Worlds: The Key of Pain

Does this ancient document have authority in modern debates about moral theology?

Dear Richard: My girlfriend claims she used magic on me to make me fall for her

The shapshifting nature of Ritual

Prophet Lands In The Dock Over Witchcraft Prophecy

Something to Think About

TikTok, Cameo and Clubhouse spiritualists are in high demand

Magical Baking: How to Incorporate a Bit of Witchcraft into your Kitchen

How to Celebrate Mabon

Ready for a spell at wizardry and witchcraft quiz

Science or witchcraft? .. The horoscope reveals how to predict events – Since science and witchcraft BOTH slop at the same trough, it could be BOTH!

Archangel or goddess? A new trail raises questions about the pagan past at Lake Nemi

A Pagan Birthday in a Time of Pandemic

The practice of hexes and curses by modern Witches

Bubbling Brews and Broomsticks: How Alewives Became the Stereotypical Witch

Dare to be a Green Witch–Free Zoom Talk

The Best Halloween Date Ideas to Get In the Spooky Spirit

We Predict These Will Be The Biggest Halloween Costumes Of 2021

The Best System of Magic

When hate comes to town, Pagans stand up to protest

Tea and Magic: Revealing The League of Gentlewomen Witches

30 Halloween Songs for Your Playlist This Year

Paganism, gods and goddesses aside, is the most LGBTQ-affirming faith in the US – A PERFECT article for the last days.

Hekate in my time of grieving

Washington, D.C. Quidditch team to play first match since pandemic False Or Fabulous/Genuine Prophets? – There are NO prophets–and any who claim to be are false.

Weekly Horoscope, 11 to 17 July 2021: Check predictions for all zodiac signs

The Most Spellbinding Books About Witches

‘You natives, be grateful that your children died as Christians, not pagans’: American Conservative magazine tells indigenous people in Canada

‘Anyone is welcome: MeetGeorgie Windsor and the Cambridge University Witch Society

“I’m A Witch, I Started Flying When I Was Small” – Actress Nkechi Blessing Says

Lessons from the past for thee Christians of today

“The Devil’s Chapel”, for followers only

UK: Teenager who killed sisters was ‘sacrificing’ them to satan for £321 million lottery

Black magic: The history and brutal demise of witches in Tayside and Perthshire

WHY We Need to #DefendOccultBooks

Antisemitism and Witchcraft in the Middle Ages – It’s simple enough to see where articles such as the linked one would like to take the reader.

Mainers’ connection with nature is fueling an increased interest in witchcraft – Of course it is.  After all, who doesn’t connect nature and witchcraft?

How Lizzie & Josie Could Become Tribrids In Legacies

Resilience aka Celebration of Life

Review: A Cauldron Overflowing with Sacred Knowledge – “Our Troth” vol. 2

“For the preaching of the cross is to them that perish foolishness; but unto us which are saved it is the power of God. For it is written, I will destroy the wisdom of the wise, and will bring to nothing the understanding of the prudent.” -—1 Corinthians 1:18-19