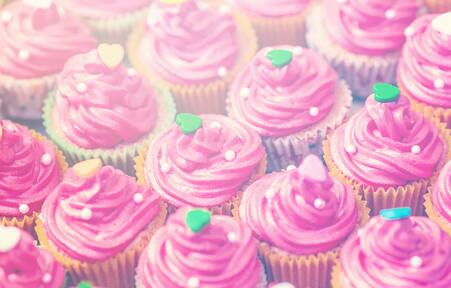 Diminishing marginal utility refers to the phenomenon that each additional unit of gain leads to an ever-smaller increase in subjective value. For example, three bites of candy are better than two bites, but the twentieth bite does not add much to the experience beyond the nineteenth (and could even make it worse). This effect is so well established that it is referred to as the “law of diminishing marginal utility” in economics (Gossen, 1854/1983), and is reflected in the convex shape of most subjective utility functions. This refers to the increase in utility an individual gains from increasing their consumption of a particular good.

SECOND, a bit of a FURTHER explanation of those definitions.

The law of diminishing marginal utility can be illustrated in the following manner.

Suppose the reader REALLY, REALLY likes to eat cupcakes. In fact, cupcakes are his favorite thing to eat in the whole, wide world.

NOW, one day the reader is walking along and says to himself, “I really, REALLY love to eat cupcakes.  And I haven’t had a cupcake to eat in MONTHS.  I have a little extra cash and some time to kill, I think I’ll head down to the grocery store and buy some cupcakes to eat!”

AND SO, the reader heads to the nearest grocery store, and after looking over what the store has to offer, he selects a BOX of cupcakes which, from the picture on the box, look DELICIOUS.

The reader purchases the BOX of cupcakes and heads outside to try them out.

After opening the box, the reader rips the wrapper off of the cupcake and tears into it.

He eats that first cupcake and thinks, “THAT was a good cupcake!  It was everything I remembered and a little more.”

In fact, the cupcake tastes so delicious, the reader decides to have another.

Then, the reader looks around and decides he has the time to eat a THIRD cupcake.

The third cupcake tastes good–but not as good as that first one tasted.

Before he knows it, the ENTIRE BOX of cupcakes has been eaten.

And, NONE of the cupcakes tasted as good as that first one.

This is the law of diminishing utility in a nutshell.

The FIRST of anything will taste GREAT or will provide a great comfort and joy.

The SECOND will taste good–but not as GREAT as the first one.

And FINALLY:  is the law of diminishing marginal utility a Satanic concept?

(It is right about now that the reader is most likely thinking, “Oh, here we go again: linking a semi-obscure economic term to the end times…”)

The pleasures of SIN suffer from a VERY HIGH ‘law of diminishing utility.’

Someone may engage in sinful behavior–say fornication–and think, “That felt VERY good!”

Some time afterwards, that person may have occasion to REMEMBER the sinful experience and think, “Wow! That felt good, but I’ll never do that again!”

Time passes and that person may have another occasion to remember the sinful experience and think, “I remember thinking that felt good–but I wonder, did it feel as good as all that?”

MORE time passes and that person thinks, “That felt so good, I think I’ may try it again sometime! What could it hurt?”

AND SO, that person tries and tries again to recapture that one good feeling he remembered from the first time.

BUT, he never does.

No matter how many times that person revisits that sin, the good feeling he remembered is ONLY a memory.

This is one reason, some people will pursue things–and people! (boyfriends, girlfriends)–which are CLEARLY not good for them: many times they are chasing that one good time they once had AND trying to ‘recapture the moment.’

BUT, the ‘moment’ never seems to be recaptured.

It is only a fading memory held out in front of them as a carrot in order to persuade them to SIN again.

It does NOT matter how many times one sins, it will NEVER be as pleasurable as the memory of that first time.

So, in this manner of speaking, the law of diminishing marginal utility is one which fallen men of the world should have NO trouble in understanding.

HAS the reader EVER attempted to ‘recapture the moment’?

HOW successful was that attempt?

image: Photo by NEOSiAM 2021 from Pexels.com