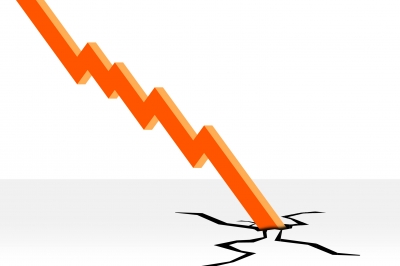 “No servant can serve two masters: for either he will hate the one, and love the other; or else he will hold to the one, and despise the other. Ye cannot serve God and mammon.”
–Luke 16:13

The economic, financial and societal collapse of the USA has been a popular media topic over the past six or seven years. IF a member of Satan’s Mouthpiece needs some new readers, “economic collapse” is a sure way to pique some interest.

Ordinary Americans, watching their jobs head overseas, have a more realistic view than their cosseted leaders. An opinion poll in August 2010 found that 65 percent of Americans believed the country was now “in a state of decline.”

But…but…but…isn’t the United States at full employment? That’s what the government/media would have us believe with their rosy monthly economic numbers and the endless calls by Satan’s Mouthpiece to Americans to “get a job.”

[The USA] may “collapse” someday in the distant future, but there is more probability that it will evolve into something else or simply fade in significance.

The country once known as the United States of America will become something else–just as the Bible (a book few read and fewer study) foretold.

So, you better grab all the food, water, guns and ammunition that you can and run for the hills, if you are able”!  But as long we see people driving in cars and living in houses, most Americans are gong to deny the truth.

MORE: Can Anyone Physically Prepare for the End Times?

Yet the value of the dollar remains relatively stable (for now) and parts of the US economy continue to grow.  For example, Amazon’s revenue grew 23% in the last quarter, Star Wars is setting global records in theaters and with licensed merchandise, organic food is crushing it, and services like Uber and Airbnb are exploding. And of course the businesses of medicine, war, and policing always seem to be booming.

Buying watches or CDs on Amazon is not an indicator of a nation’s economic health. Neither are movie receipts or cab rides. In the midst of need, many often spend their last coins on distractions. And the “businesses” of ‘medicine, war and policing’ are largely government-funded and are not businesses at all.

We are a deeply, deeply unhappy nation, and we have been trained to turn to pills as the solution.

MORE: BIG PHARMA: Mad about Drugs, Sorcery and Poison in the End Times

“And he causeth all, both small and great, rich and poor, free and bond, to receive a mark in their right hand, or in their foreheads: And that no man might buy or sell, save he that had the mark, or the name of the beast, or the number of his name. Here is wisdom. Let him that hath understanding count the number of the beast: for it is the number of a man; and his number is Six hundred threescore and six.”
–Revelation 13:16-18

There are ways for the reader to prepare–but they are NOT the methods advised by the Corporate Media.

Yes, there will be a collapse of the USA at some point in the near future. This collapse will be every bit as contrived as the making of this nation into the world’s richest and most depraved plutocracy––but a collapse it will be.

Because the nation is deceived, most will deny the possibility of collapse until denial is no longer an option.

And when the collapse comes, there will be no warnings in the media: it will be sudden, swift and complete.

MORE: Pottersville, USA: Money is Their God and Their God has Failed Them

MORE: In Times of Uncertainty, Many Turn to God’s Word

MORE: BEWARE the Cries of Those Who Urge the USA to Return to god

Has the reader placed his trust in money, the schemes of men to multiply money or the things which money can buy?

Has the reader placed his trust in the foul things which can secure him money?