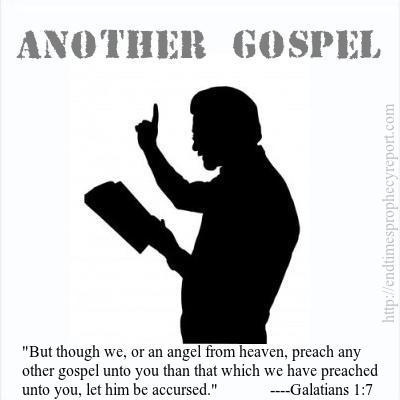 “But though we, or an angel from heaven, preach any other gospel unto you than that which we have preached unto you, let him be accursed.”
—Galatians 1:7

The phony gospel is a regular topic around these parts: the apostate churches, so-called ‘Christian’ websites, ministries, and ungodly ‘men of God‘ refuse to preach the gospel.

Instead they offer substitutes which SOUND good.

Oh, they TALK about the gospel: they just never actually share the gospel.

And they WILL NOT: they flatly refuse.

“Having a form of godliness, but denying the power thereof: from such turn away.”
—2 Timothy 3:5

Satan Has Counterfeited the Christian Church

The churches are now the property of the tares: they have a thin shell which looks good to outsiders–but they are rotten inside.

Jesus described this very condition to another group of religious counterfeits: the scribes and Pharisees.

“Woe unto you, scribes and Pharisees, hypocrites! for ye are like unto whited sepulchres, which indeed appear beautiful outward, but are within full of dead men’s bones, and of all uncleanness.”
—Matthew 23:27

Idolatry is a particular problem of the end times. Though it is no excuse, it appears few recognize idolatry for what it is.

[NOTE: Since there has been much bad publicity which has resulted from the public questioning this doctrine [which is a clear contradiction of Scripture], the church has basically said “This does not mean what it clearly says.”

However, this doctrine is STILL part of that church’s official teachings [as it has been for centuries]. There has never been any attempt to change the doctrine, only attempts to convince people it doesn’t mean what it clearly says.]

Also, as a former member of that particular church, this writer can affirm that doctrine is indeed taught as it is written. And this has been testified to by various public pronouncements of the popes over the years.)

Regardless of the consequences, men will cling to the idols they have erected: deceived that their idols have the power to save.

“And the rest of the men which were not killed by these plagues yet repented not of the works of their hands, that they should not worship devils, and idols of gold, and silver, and brass, and stone, and of wood: which neither can see, nor hear, nor walk:”
—Revelation 9:20

There is no greater proof of idolatry than the preaching of other gospels.

Preaching the good news of the sacrifice of Jesus Christ is a commandment from Jesus Himself.

“And he said unto them, Go ye into all the world, and preach the gospel to every creature.”
—Mark 16:15

Preaching the other gospels serve other gods.

Other gospels are a plague, virulent and ubiquitous.

Here’s an example from an article we read last weekend.

Every single teacher or leader in Christ needs to preach the Gospel message. This message says: believe that Jesus is who he said he is, repent, accept his mercy as a free gift, forgive everyone, obey the commands of Jesus and the Apostles, love, exercise self control, and be holy –for without holiness no one can see God. Every message that is not centered on scripture and the clear message contained therein must be ignored.

Of course, this is NOT the gospel message.

But it sounds good.

Which is the whole idea: the gospel of Jesus Christ is how men come to salvation.

“Moreover, brethren, I declare unto you the gospel which I preached unto you, which also ye have received, and wherein ye stand; By which also ye are saved,”
—1 Corinthians 15:1-2

Satan and his deceitful workers DO NOT want ANYONE saved.

So they offer sound-good, powerless other gospels which have NO power to save.

There are a variety of counterfeit OTHER GOSPELS offered to the lost by the tares:

NOW, nothing is wrong with ANY of the above: they are all nice thoughts. Several are explanations of salvation.

BUT, they are NOT the gospel of Jesus Christ. NONE have the power to save.

When offered in place of the gospel of Jesus Christ, they become other gospels. Other gospels are a clever snare from the dragon (Satan).

The gospel of Jesus Christ is the “power of God unto salvation.” But the churches are apostate and have no interest in saving souls or God’s wisdom because they are wicked and foolish.

Yes, the gospel of Jesus Christ is certainly “the power of God unto salvation.”

If not for yourself, then, for your loved ones.

“As we said before, so say I now again, If any man preach any other gospel unto you than that ye have received, let him be accursed.”
—Galatians 1:8

12 thoughts on “ANOTHER GOSPEL: A Clever End Times Snare from Satan”