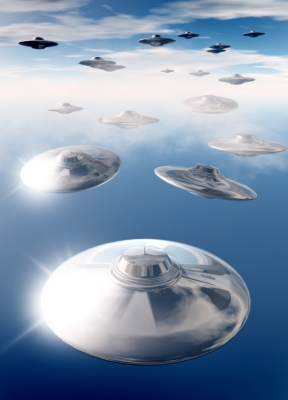 The number of cover stories for the demonic are numerous and varied.

The cover stories for UFOs are but one.

Found in a Junk Shop: Secrets of an Undiscovered Visionary Artist – Just one of the many snippets of evidence from the last two centuries which point to UFOs being a cover story–not a cover-up–perpetrated by the elite which now control the government of the USA (and other countries).

This helps explain various odd newspaper stories from 19th century America.  Such articles reported well-dressed men and women debarking from “flying machines” to take in the local sights and departing.  One such article reported a well-dressed elite woman shooting partridges from the deck of such an airship.

This linked article, while very informative, puts the customary spin to discredit the information that is in black and white before the reader.

But IF Satan’s Mouthpiece (the Corporate Media) wanted to truly discredit such knowledge, why wouldn’t it just bury it so it can’t be found–as it does so much other inconvenient information?

This is the purpose of such articles: NOT to inform, but to “nudge” readers who may have some information on the subject into “preferred conclusions.”  These types of articles regularly appear in every field, providing no new information but rehashing information which has surfaced through extra-Corporate Media sources.

The article then attempts to lead the reader to dismiss what he is reading.

“But even Navarro, despite his exhaustive research, had his doubts about Charles Dellschau’s story and how much of it was fiction. Were they tall tales to keep an old man entertained? Or were they true accounts of his youth, perhaps innocently exaggerated here and there?”

Many are the places the story of Charles Dellschau has turned up in the media.

All of them chipping in on the discrediting theme.

HOWEVER, it is important for the reader to remember that man concocts many cover stories to hide his involvement with the demonic.

MORE: Secrets of the Sonoma Aero Club – There’s much more on this subject for the interested researcher with the time and inclination to piece together this puzzle–though these things do have a way of disappearing. As can be imagined, this information was once, and continues to be, a closely-held secret.  It has been reported that occasionally, members who shared the club’s secrets with outsiders met with unfortunate accidents.

By the greatest coincidence, an ad appeared in the 1949 New York Times–it only ran for several days–promising to fly prospective clients and their equipment to California.  But the ad suddenly disappeared–as did the gentleman who placed it.

One further great coincidence: About the same time, the founder and first editor–a man by the name of  Rufus Porter– of Scientific American (a publication to which Albert Einstein later contributed) published a book titled Aerial Navigation: The Practicality of traveling pleasantly and safely to California in Three Days.   As can no doubt be imagined, this book excited great interest.

Readers may rightly ask: how could anyone keep such information from the public?  One answer is one that is still regularly used today: most people intellectually turn tail and run at the first sign of ridicule.

Every day in 2014 America, the Corporate Media puts this observation of human nature to good use.

One other answer is that a great many things have been kept from the American public–and one suspects that most Americans (despite their demands that “I have a right to know!”)– desires it to be so.

HAS the reader been taken in by stories explaining away demonic power?