August 24 – World War 3 media talk increased greatly over the past several days and it all focused on Korea, both North and South.

Shooting took place this past week on the Korean peninsula and the shooting escalated into artillery fire from both sides. Korea was the site of the US-led Korean War from 1950-53.

Will the shooting develop into anything more?

Hard to tell, but talks were immediately commenced amid the North’s troop movements and the usual barrage of verbal threats.

The guess here is that it’s all just part of the run-up to the real show: the Middle East.

SPECULATION: World War 3 will start in the Middle East and spread to Asia to include the Koreas, Taiwan and China.  And probably other countries as well.

Until that all gets underway, expect a period of calm over the upcoming months punctuated by outbreaks of violence designed to keep the folks at home guessing.

HOWEVER, history records it is during the midst of relative calm that previous World Wars have broken out after long periods of underlying tensions and military build-ups.

The Bible [Revelation 6:4 among others] is clear on the subject of an end times world war.

“And there went out another horse that was red: and power was given to him that sat thereon to take peace from the earth, and that they should kill one another: and there was given unto him a great sword.”

THE CALL remains the same:
Regardless of what fear is promoted in the media, World War 3 is AT THIS POINT, still down the road. However, every day brings it closer to reality. 2015 should bring more events leading, if not to WW3, then to the road to total world war AT SOME POINT.

That point could well be in the next twelve-sixteen months.

Regardless of the WW3 chatter, we’ll repeat what we said about a month ago about the Iran nuke deal and the Munich commentaries.

LAST WEEK: With the Iranian nuclear deal completed, President Obama’s detractors took to the media to proclaim it the foundation for a future World War III.

One, in fact, called it another “Munich.”

The Munich Conference was a famous stop on the road to World War II. The agreement was signed about 11 months prior to the outbreak of World War II.

World War III watchers may want to mark their calendars for June 2016.

OH, and Munich was hailed by British Prime Minister (who was portrayed in the media as weak and bumbling–just like another certain Western leader today is) Neville Chamberlain as evidence of “peace for our time.”

Just as another certain Western leader is portraying the Iran deal as a victory for peace over war.

See [World War 3 Watch: June 1, 2015] for particulars concerning the next domestic terror attack in the USA.

This is due to renewed fighting in Korea.

27 percent is still very low, when compared to the past few years. However, those who believe “all war is an engineered event” are convinced that this means big things are just over the horizon.

HOWEVER, there is still a feeling here that events have a little bit longer to go before WWIII begins. The long term view is 100%. This is no change from our last edition.

Pre-war propaganda levels in the USA against all things Muslim continues to escalate. The escalation in anti-Muslim propaganda in the USA began about a year ago and continues full force.

NOTE: Something readers should keep in mind: the USA and Russia kept tensions high for 45 years during the Cold War without ONCE facing off in a shooting war. The tensions were continued by proxy wars in Korea and Vietnam and dozens of other, lesser points around the globe during that 45 years.

Of course, when World War 3 DOES begin, it’s likely to happen quite suddenly after a long build-up. The world is in the building-up stage at present. But then again, as a point of comparison, the world built up for 45 years during the Cold War.

The Corporate Media continues to hype fear in the homeland.

However, these warning appear to be agencies protecting themselves so when the next attack comes, they cannot be accused of “sleeping on the job.”

Is the deceptive media setting up another scenario of hyped tensions over a long period?

Little has changed from last week.

However, the Bible is clear that at some point, there will be World War.

That is our final arbiter.

Most of the regional assessment–as has been the case for the last year–registered “no change” this week.

August 24, 2015 – When WW3 does break out, it will be without warning; very suddenly. Do not expect any warning from the same media which is hyping fear of World War III on an almost daily basis.

OLD SPECULATIONS: The next domestic terror attack will likely involve an EMP or an Ebola-type bio-weapon.

NEWER SPECULATION: The next domestic terror attack will likely involve multiple attacks at the local level over a very large area of the USA. (See June 1, 2015.)

NEWEST SPECULATION: How long will World War 3 fears be promoted in the media? Is it all just “fear promotion,” as during the Cold War? Even Korean fighting has the feel of a “manufactured” event.

FINALLY: 2016 has always looked like a logical time to begin worldwide war. We’re still holding to that timeline.

Overall Tension Assessment:The assessments have remained largely unchanged over the last twelve months. The assessment is QUIET with a continuing chance of terror leading to war. 2016 looks like a logical time for events to begin ALTHOUGH a ‘terror attack’ could take place at any time prior to 2016.

Of course, a major event will suddenly change all of this.

[For earlier editions of World War 3 Watch, consult one of the older issues.] 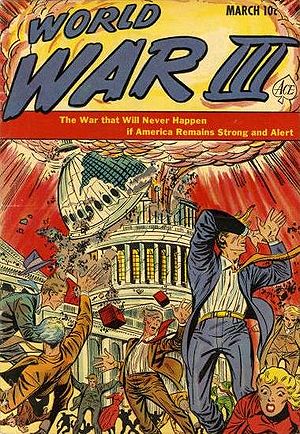