It matters not if the stories are true or not: men just like hearing a good yarn.

The stories appear to be EVERYWHERE.

Sometimes, the storyteller happens to be a politician or a criminal. But this is no surprise: men even expect politicians and criminals to lie.

Sometimes, the storyteller is a scientist, a doctor, a journalist, a professor, a historian or a pastor.

Modern man expects these men to tell them the truth, but even when it’s discovered these men have lied, it’s quickly forgotten.

Science: A Collection of Stories

But this is not a modern phenomena: men have ALWAYS desired being lied to. The children of Israel were God’s own people. YET God said Israel not only was deceived and lied to, they DESIRED it to be so.

“That this is a rebellious people, lying children, children that will not hear the law of the LORD: Which say to the seers, See not; and to the prophets, Prophesy not unto us right things, speak unto us smooth things, prophesy deceits:”
—Isaiah 30:9-10

“A wonderful and horrible thing is committed in the land; The prophets prophesy falsely, and the priests bear rule by their means; and my people love to have it so”
—Jeremiah 5:30-31

Hundreds of years later, Jesus basically told the Jews the same thing. The Jews had listened to lies for so long, they could not recognize the truth because there was no truth in them.

“Ye are of your father the devil, and the lusts of your father ye will do. He was a murderer from the beginning, and abode not in the truth, because there is no truth in him. When he speaketh a lie, he speaketh of his own: for he is a liar, and the father of it.

And because I tell you the truth, ye believe me not. He that is of God heareth God’s words: ye therefore hear them not, because ye are not of God.”
—John 8:44-45,47 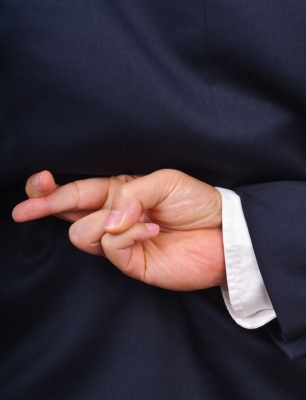 PART ONE: END TIMES DECEPTION: Tell Me a Story

PART TWO: TELL ME A STORY Part Two – WHAT are some of these stories?

PART THREE: Tell me a story part three – WHO is telling the stories?

PART FOUR: TELL ME A STORY Part Four: Why Are All of the Stories Being Told?

Jesus Himself warned of the lies and deceit which would be present in the end times.

Jesus even warned that many of these last days liars would originate in the churches.

“For there shall arise false Christs, and false prophets, and shall shew great signs and wonders; insomuch that, if it were possible, they shall deceive the very elect.”
—Matthew 24:24

There are other warnings about Satan’s men working in the churches.

“For such are false apostles, deceitful workers, transforming themselves into the apostles of Christ.”
—2 Corinthians 11:13

All these liars will tell stories; i.e., they will tell lies. And most men will enjoy hearing the lies. They don’t care if they have the truth, they just want to hear a story.

That’s enough to make most men shut up.

In the end times, God will send a “strong delusion” because He says most men prefer a lie because they don’t have the love of the truth.

“And with all deceivableness of unrighteousness in them that perish; because they received not the love of the truth, that they might be saved. And for this cause God shall send them strong delusion, that they should believe a lie: That they all might be damned who believed not the truth, but had pleasure in unrighteousness.”
—2 Thessalonians 2:10-12

The end times will be marked by lies and deceit. We can see this by the number of stories (lies) modern man tells himself about EVERYTHING.

Whether it’s how man got here, sin, disease, drugs, what has happened in the past, what will happen in the future or what the Bible says: modern man is inundated with stories.

Modern deceivers even tell stories which promise to expose the earlier lies which were told.

The stories come from our TVs, computers, smartphones, books, newspapers: modern man has no lack of stories from which to pick.

And because modern man does not have a love of the truth, the stories he hears are almost all lies.

And modern man loves to have it so.

Most men know they are being lied to.

But they don’t really care as long as their lives are comfortable.

Eternal salvation through Jesus Christ is no lie.

11 thoughts on “End Times Lies: Tell Me a Story”